As investors ring in the new year, some may see the occasional headline about the “January Effect”.

To examine this idea, the fund managers Dimensional have looked at the world’s largest stock market where there is more than 90 years of reliable data, which is the US. Have past January returns of the top 500 companies in the US, the S&P 500, been a reliable indicator for what the rest of the year has in store? If returns in January are negative, should investors sell stocks? Exhibit 1 shows the monthly returns of the S&P 500 Index for each January since 1926, compared to the subsequent 11-month return (i.e., the return from February through December). A negative return in January was followed by a positive 11-month return about 60% of the time, with an average return during those 11 months of around 7%.

This data suggests there may be an opportunity cost for abandoning equity markets after a disappointing January. Take 2016, for example: The return of the S&P 500 during the first two weeks was the worst on record for that period, at -7.93%. Even with positive returns toward the end of the month, the S&P 500 returned -4.96% in January 2016, the ninth-worst January return observed from 1926 to 2017. But a subsequent rebound of 18% from February to December resulted in a total calendar year return of almost 13%. An investor reacting to January’s performance by selling out of stocks would have missed out on the gains experienced by investors who stuck with equities for the whole year. This is a good example of the potential negative outcomes that can result from following investment recommendations based on an “effect.” 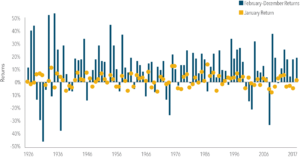 Source: Dimensional Fund Advisors LP. In US dollars. S&P 500 Index data provided by Standard & Poor’s Index Services Group. Indices are not available for direct investment; therefore, their performance does not reflect the expenses associated with the management of an actual portfolio.

Past performance is not a guarantee of future results.

Over the long term, the financial markets have rewarded investors. People expect a positive return on the capital they supply, and historically, the equity and bond markets have provided meaningful growth of wealth. As investors prepare for 2018 and what the year may bring, we should remember that frequent changes to an investment strategy can hurt performance. Rather than trying to beat the market based on hunches, headlines, or indicators, investors who remain disciplined can let markets work for them over time.

This article is for information only and no action should be taken based on the information alone. If you are looking to invest or even review your finances then you should seek independent advice to ensure that any investment strategy fits your specific circumstances and objectives.